The Beginnings: I left an Entire World Behind

In 1986 – the year of Chernobyl and the spring before the summer of my move to England – the smell of strawberries seemed headier than ever. I was twenty-four and in the kind of love that makes the oceans part. I was about to leave an entire world behind without a second thought, in order to live that feeling to its end, wherever and whenever the end happened to be.

Mother was terribly upset when she overheard Granny telling my English husband how to preserve a human head. Their discussion, in which I acted as interpreter, focused on the relative advantages of pickling versus salting, a fresh take on recording Granny’s favourite recipe.

Why I joined the Yugoslav Communist Party

If anyone, Tom Courtenay may have been the main culprit. In all those long afternoons of the seventies which I spent sitting in matinee screenings at the National Museum of Cinematography, in the roomy basement of a building in Kosovo Street in Belgrade, emerging bleary-eyed into the blinding light of a Balkan summer, few films affected me as deeply as Dr Zhivago. Granted, part of me knew even then that it was fundamentally a piece of sentimental trash, but the Great Russian Soul, as sieved through the quintessentially English melancholic view of history, was absolutely irresistible.

I’d never known anyone quite like my uncle Zhivoyin until I met my future father-in-law. The bearing, knowledge of shoe shine and brass, even some of the hand gestures: it was all there in this Old Etonian and Indian cavalry officer, but with a kind of dishevelled, devil-may-care dash which revealed the peculiarly British, old-fashioned and upper class horror of anything that might be described as sissy, prissy or any other issy adjective.

I am a reluctant accountant of the heart. I’ve loved some men and others have loved me; and then there was a handful of times when loving and loving back kept the see-saw in balance, my feet in the air and my eyes on the sky. No life’s story now seems complete without ledgers of affection, yet they create hierarchies which betray and deceive. Time lengthens some horizons and foreshortens others. There are memories which haunt and memories which sleep like babies in little white coffins. With passing years, a single kiss can acquire more meaning than months of naked skin.

At the same time, throughout the country which I still called my homeland innocent people huddled in the dark, afraid of the morning. At the BBC, I always seemed much closer to their pain than anywhere else in London, so close in fact that I felt it all the time. I was my own most faithful listener, a hostage to the stories of death about which I could do nothing but transmit. 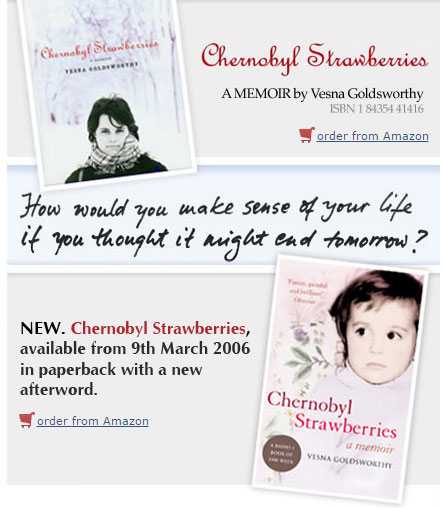 – The first three are available on Knjiga Info

Chernobyl Strawberries is to be published in German as “Heimweh nach Nirgendwo” by Deuticke. Order on Amazon

Honest and consistently fascinating piece of writing… Goldsworthy captures with real wit and perceptiveness what it was to be, not only a Serb, but a Yugoslav, to grow up under the red star tricolour … a deeply personal, original and absorbing work.

“This is an enigmatic and compulsive read as Vesna has the cynical wit of an early Tom Sharpe, or Robertson Davies and, in addition, manages to weave into her narrative a haunting whiff of foreboding … The quintessence of her descriptions leaves a resonance humming in your ears for a long time.” Hermanus Times, South Africa, 05